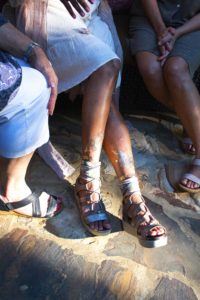 Hey Love,
Has a friend’s confrontation ever felt like a kiss to you? Sometimes a hard, but honest word spoken in love, seasoned with grace can actually be encouraging to a soul. Today, I’m going to talk about ways to help you find your voice- especially when you’d much rather shut down or lash out instead.
This is the final in a 3 part series of solo episodes I’ve been doing on issues that I’ve grappled with personally. This has been a stretch for me as a wanna be writer/podcaster…..  but I’ve had a lot to say about my healing journey which is probably not unlike yours.
You may struggle with people pleasing or eating codependency for breakfast like I did for most of my life….If so, this episode will be beneficial to you as we break down what a non codependent friend of mine did right when she confronted me. I feel indebted to her because I’m a better parent for it.
I’ve also had a few friends do it…mmmmm, how you say…. NOT so well…We’ll discuss what to do in those situations too- where the other party might not really be holding out the best intentions for you….   Have you ever initiated a “necessary ending?” I have. I’ve been on both ends of one and it hurts either way. But sometimes, a necessary ending is just the thing that needs to happen.

The main point is this; Relationships are worth the risk. And worth the work it takes to keep them healthy. And sometimes that means saying good bye.
I will mention in today’s episode that there’s really only one way by which a woman can be freed from codependency and find her voice in significant relationships. I’ll expound on how to enjoy the fruit and freedom that is ours in Jesus Christ by the power of the Holy Spirit, who enables us to speak up IN love to the ones we DO love.
I’ll also tell you about our Frother giveaway. Here are instructions;
Post a photo of you with your favorite mug on instagram/Facebook.
Tag @Heylovepodcast on each.
Add this hashtag;   #myfrotherandme
And for the caption, fill in the blank-  My frother and ____
Here’s the question; If you were on an island, what is the one thing you’d take with you? (besides the brother.) Mine is
“My frother and my journal.”   Enter to win a chance on ista or fb. We’ll have a drawing at the end of this month.
Till next time,
Bye Love!
ps- At the time of recording, I was thinking about one of my listeners who prefers to not include her face in photos. That’s why I said something about “You don’t have to put your face on there. But I don’t mean for it to sound like you CAN’T put your face on there. I’d love to see your face on there. By all means, if you wanna put your face on there, DO put your face on there!!!   :-0)