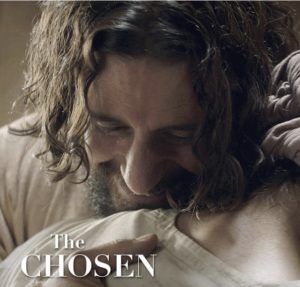 Have you been feeling more anxious lately? These days, I feel and hear that a lot. I’ve been fearful about the state of the world, violence in the streets, pre election political unrest, post election political unrest, all the same things you’re feeling fearful about… PLUS – I’ve been feeling some angst about writing. It feels incredibly vulnerable to be writing out a tv pilot! #vulnerabilityhangover  #igotitbad

My guest, Ryan Swanson, is a big time Hollywood producer and screenwriter and is no stranger to fear. For the past few years, he’s been the head writer for a little project called, “The Chosen.” And I’m honored to say that in the past few months, he has become a friend and mentor to me as I’m working on my “teleplay.” (I just learned that word from him!)

Ryan one of the most sensitive and brilliant writers you’ll find. And if you’re a fan of “The Chosen,” you know what I’m talking about. He dealt with a fear of flying on a trip he took to Israel with his cowriter Tyler Thompson (who will be on the show next month!) They took a tour through the Holy Land as they were researching for this 7 season project. In case you haven’t heard the conversation I had with (show creator) Dallas Jenkins yet, go back and grab that. Ep 103; we’ll wait right here….

What’s the thing that God asks of you? Ryan says “Just show up.” I’m reminded of Micah 6:8 which says, “Act justly, love mercy, walk humbly with your God.” Here’s a recap of Ryan’s 3 C step process to moving out of our fear;

1. CONFESS your fear: give it a name.

2. COMMUNE with others and with God about it.

On today’s episode, Ryan is kind enough to give me feedback on one of my earlier versions of the logline (a one or two sentence summary of what the show’s about.) Say a prayer for me if you think of it- that I’ll have clarity and energy to finish the task I feel called to.

What about you? What are you working on? Shoot me a line, I’d LOVE to hear from you. Karthimasters@gmail.com. And as always, a discovery call is always free. So if you’re interested in some coaching around your fears or the creative in you needs some nurturing, reach out to me! :-0)