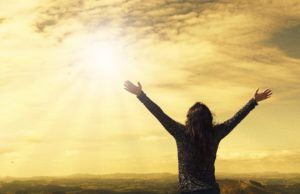 Here’s part 2 of a message I delivered to a group of Empty Nesters recently. Take courage! :-0)

As we give thanks in all things, not FOR them but in them, we express faith that God can bring good out of our disappointments, our losses, our betrayals, our suffering. In the words of Joseph from the very end of book of Genesis, “What the enemy meant for evil, God has turned into something GOOD!”  The image I get is satan is on a short leash and at the other end of that leash… is God.

Growing up in the warzone that was my house, I came into the world jittery…skiddish… I was told by a couple of counselors that I was experiencing a severe case of PTSD- which I thought was just something soldiers dealt with. But it’s really anyone who’s had to be in that survival fight/flight or freeze part of the reptilian part of their brain for long periods at a time.

So the timing of covid was interesting- I think I’d done so much heart work; Jesus has delivered me and healed me of so much, that when the world started going mad, it felt like “I’ve been here at this level of anxiety for nearly 50 years, so oddly enough,  over the last couple of years, I have felt more peace than I would have ever imagined i would; assured that He is in control… I still struggle with anxiety attacks from time to time but I don’t contemplate suicide every time i get in the car, like i ussed to. So that’s good.

But the world is not surprising to me. It’s doing what the world is gonna do with out Hope Personified- Jesus Christ. The madness of the world is all predicted in the Word of God.  If anything, I feel like this current climate has solidified to me, all the more- that this is NOT my home. My hope is set Elsewhere.

Still, we’re called as believers, to be in, not of – this world, as we are citizens of a faraway Kingdom… so how do we hold the tension of both? Be present here at the same time? How do you hold your own disappointment on earth?  And How has God made His Name known to you in that space of disappointment?

I love the way the authors of the book say it’s normal to experience disappointment, especially at this stage of life. Philip Yancey would agree; he says there’s disappointment WITH GOD or Disappointment without God. Does it help you to know that it’s part of the human condition? It gives me great comfort. We get to be honest… EQ= Emotional Intelligence.

As a life coach I help women and a few men… get more literate in EQ. This is key to being present… being in not of this world. And the training alone has changed my life. It’s one of the tools God has equipped us with; a big reason I haven’t sunk low into depression in over 7 years now.

When I was seven years old, I began writing in a journal- letters to an unknown God. We were immersed in Hinduism, and when my parents brought me here from India we kept the traditions we went to temple we celebrated Hindu holidays with all the Hindus in the area. I was growing up in New York City so there were many of us in the early 1970s.

But I always knew there was something more! So I began writing letters to this other God, Whose Name I did not know. I remember writing prayers to him “God, if you’re a real. show yourself. I know you’re different from the gods that I’ve been taught to worship. The Hindu gods – everything is based on fear… and performance. But I know you’re not like that. I know that you are a loving caring father. And please…. give me a puppy for Christmas?”

Well when my dad decided to move away from the city we came to a small town in Missouri, which was known as one of the buckles of the Bible belt. And I remember so many of the kids in my middle school were involved in church – they had something every night of the week!

And I would come home from school frustrated asking mom all about this Jesus of whom they spoke. I hate Missouri, I’d say. Everyone here, they’re just a bunch of Jesus freaks! My mom would answer all my questions- I was perplexed at how she knew so much about this other God. As far as I knew we were all Hindu.

But when she spoke about Jesus, I told her it was like she was talking about a real live person. Almost like a woman in love with another person? I told her mom you’re kind of freaking me out here. I did ask her how do you know so much about this other God? She finally confessed that she had been a believer in Jesus for 26 years. But she was afraid to say anything about it to my dad because he would’ve shipped her back to India to his family where she probably would’ve been treated like a slave or worse….

So my mother was a Christian. I had no idea! But it all started making sense to me. Things sort of started coming together – I realized that the other unknown God that I’d been writing letters to in that journal when I was a little girl – He was one and the same. His Name is Jesus.

I don’t understand predestination. I’m a simple minded girl. But I know that he is the one who deposited that interest the question is my heart; that question… He made a daring raid into enemy territory to rescue my soul. He’s the one who made me RIGHT with God. In spite of the fact that I still sin.I still disappoint myself. I don’t disappoint HIM anymore bc now when He looks on me, He sees His Son.

Once I really started getting this, I saw that my bag of rubbish gets traded in for His perfect slate, I saw how uneven the trade was, and how different the system is from the performance based acceptance I grew up with, I became like those first believers in Acts – it’s like once you know The true Jesus – once you’ve looked into those eyes – you’re ruined.

I’m ruined now. How can I ever go back?  I would die for this man. But more importantly I will live for this man. You can trust this man – he’s good. If you’d like to cultivate a friendship with Jesus, all it takes is faith, simple belief. Talk to me, talk to Terri, or go directly to Him.

My prayer was simple as a preteen; I simply got down on my knees and said “Lord, I don’t understand all this, but I understand enough to know you’re the one I’ve been looking for. I need you. I believe you. Come and make my heart your home.”

Why do even we, the righteous ones – remember that doesn’t mean we’re perfect; it means we’ve been made right with GOD. Why does God allow US, the ones who follow Him, experience disappointment?  Why does a Good God allow suffering? And pain?  When I don’t know the answer to a big question, I always try to remember what I do know;  I know that when God led the Israelites out of Egyptian slavery, He is the One who allowed Pharoah’s heart to be hardened so that God’s Name would be made known.

Tim Keller says that in fairy tales, there’s a period of time called “Disenchantment” where the spell wears off and the townspeople are finally awake enough to do something about it; either fight the sorcerer or flee… but there’s only a small window of time to escape before the door to the castle closes. Disenchantment/Disappointment can be a good thing. It gives us a moment of clarity.

My new friend, Carla had become so disenchanted with the evil/darkness she had been seeing in the world of pharmaceuticals (pre covid,) she left and became a massage therapist. But now, atheism has also left her disappointed. she is now coming back to church; questioning the ones who cheered her on during her deconstruction…

I get to see her again tomorrow. I’m going to invite her to church and I’d love it if you’d join me in praying for her to choose Jesus. It’s the most important decision she’ll ever make in her entire life. Not only will it determine where she goes in the next life; but it will radically free her in this one to be all God designed her to be.

Jesus showed us how to suffer well. How to live “integrated,” holding the sorrow of this world and joy of the next at the same time. He didn’t take up a “Captain America” shield and say “Look at me!” He wept. Drops of blood seeped out of His pores. And in the Garden of Gethsemane what did He ask the Father?   (Is there another way?)

He could’ve snapped His fingers and legions of angels who were armed and ready for battle, would have been dispatched. But instead He told them to stand DOWN.  Jesus is so brave and thorough. He didn’t want one drop of God’s wrath or disappointment to be left for us. He took it on Himself so it’s all spent. If you belong to Christ, you live here on earth but belong to another world. You’re a citizen of God’s Kingdom. This truth provides us the path to living here with HOPE.  It helps us reverse engineer our lives.

He shows us that Pain redeemed speaks louder than Pain removed. Let the Lord redeem your pain, your disappointment.  The One who went out as a Lamb is coming back as a LION.

Think about the last time you were in a theater to watch a play. What happens right before the spotlight comes up? The house goes dark. Remember that the next time you feel the sting of disappointment. The curtain’s about to rise; the light is about to FALL. :-0)